Scholarship Foundation of Indian River County’s Football Classic was an annual fund-raising held at a football game between Vero Beach High School’s Fighting Indians and Sebastian River High School’s Sharks. Scholarship Foundation hosted a VIP Event where guests could enjoy a catered BBQ with all the fixings and then enjoy the Big Game from our tent on the sidelines.

Held annually for 14 years from 2006-2019, the annual event raised a GRAND TOTAL of $194,059.29 for scholarships which have been awarded to students of Indian River County. Scholarship Foundation is grateful to the many organizations and individuals who helped sponsor this event over the years and to the schools and teams for their support by hosting the games and providing a portion of the gate receipts to support scholarships.

The inspiration of SRHS’s Athletic Director Michael Stutze, a former Scholarship Foundation recipient and then Board Member, the event was inaugurated in 2006 as the Dollars for Scholars Kickoff Classic. It continued to be played as a pre-season game between the two Indian River County high schools until 2009.

In October 2011, the School Board voted and principals have now agreed that the Dollars for Scholars Football Classic will always be played the first game of the regular season and at VBHS Citrus Bowl, with each school rotating each year as host school.

In 2014, the event was renamed the Scholarship Foundation of Indian River County Football Classic after the organization changed its name from Dollars for Scholars.

In 2015, there was another change to the Classic, with the school’s deciding the games would be played as the last game of the season and again rotated between Citrus Bowl and Shark Stadium.

In 2019, the game was again held as a Kickoff Classic

Both VBHS and SRHS have decided that they will no longer play each other as a Football Kickoff or Regular game. We look forward partnering with the high schools on another opportunity to support scholarships through a school-related event in the future. 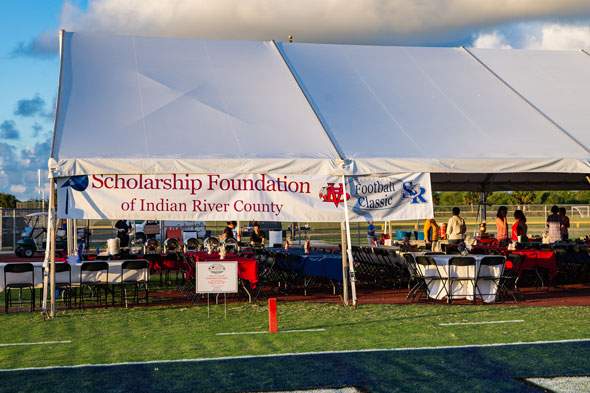 Click here for more pictures of prior year's events.